MARQUES (03/22/05)
Oaxaca, Oaxaca
Rating: 5
Brew: Negro Modelo
Comments: Marques is located on the north side of the Zocalo. This is the perfect spot for people watching and caeser salad is made from scratch at your table. Service is quick and friendly. Live music, performers, and the odd political rally add to the spectacle. The Doctor - Rio Minerals Ltd.

PAPAS and BEER (11/25/02)
Encenada, BCN
Rating: 6
Brew: Tequila
Comments: For an all night party and crazy time go there!!! You will love it!! (Evidently this place made an impression on the submitter. Tequila is the "brew" in a beer place??)

Ayutla  (the whole town evidently) (02/21/00)
Ayutla, Jalisco
Rating: 6 bottles
Brew: None mentioned specifically
Comments: This place is full of beautiful women, and many party scenes. There is a club, and many great seafood "palapas" restaurants (Mexican food here is really Mexican and delicious). The environment is clean, and beautiful. There are many rivers, and beautiful waterfalls where you can swim, and dive. Among the places is "El Salto de Don Juan", El Salto de Los Arrallanes", "Saloya", "La Toma de Agua", and last but not least "Los Guajes". If you are looking for modern Mexico merging with the ancient, then this is your place. (It is more relaxing than Vallarta  - NOTE: I figure this was submitted by the Ayutla Board of Tourist Development)

Garza Flores (11/14/99)
Linares, Nuevo Leon, Calle Hidalgo, opposite of the PEMEX gas station
Rating: 5 bottles
Brew: Cuatemoc and Moctezuma - both brands
Comments: If you go there, chances are that you will run into some students, sometimes maestros,of the nearby Facultad de Ciencias de la Tierra de la Universidad Autonoma de Nuevo Leon - this bar is our favorite hangout. It is a geologists place, we are VERY well known there. Chuy the barkeeper will attend you well. Try the bandera - red green and white mexican flag (sangria for red, limon for green, and of course tequila for white). Satisfaction guaranteed. We do quality checks several times a week!

Yerbabuena (10/13/99)
Yerbabuena, SLP (about 1/2 hour south of Charcas)
Rating: 5 bottles
Brew: Anything
Comments: The friendliest most welcoming group of people in a rural area. 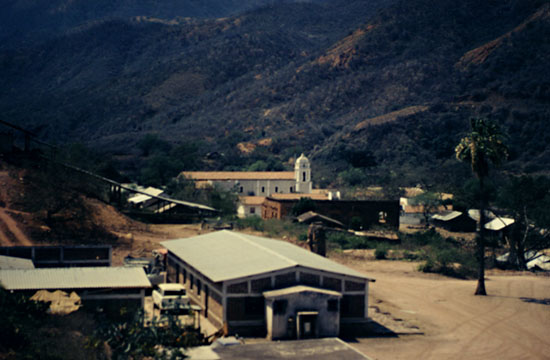 Rating: 6 bottles
Brew: Tecate or Modelo
Comments: San Jose de Gracia is an old mining district with a town of 300 or so. Adelmos' is a small beer porch at the entrance to the Minera Finisterra mill site. He's got two propane frigs and will cool special orders for thirsty geos with 12 hour notice. (Roger Malmquist)

El Club Minero (12/15/98)
Plaza Valenciana, Guanajuato
Rating: 2 bottles
Brew: A variety, nothing special
Comments: Some of the miners from the Valenciana hang out there. Good place to score specimen materials from time to time. Miners from the little towns out in the boonies also drop by for a nip and a cold one now and then (Walt Bowser)

Huizar (07/05/98)
DGO/SIN border
Rating: 6 bottles
Brew: Modelo
Comments: Huizar is 6 hours by mule from the highway between Durango and Mazatlan. Beer is available from a local entrepreneur who brings it in by mule every week or two. Although the beer can not be chilled, the people are very hospitable and friendly. We drank over 300 beers together, slaughtered and ate most of a pig and passed out on the jefe's porch at the end of our last geological project. Thanks for a great party Huizar!!! (muskox@istar.ca.)

Foxi's (01/31/98)
Acapulco, Guerrero
Rating: 6 bottles
Brew: Everything (I mean everything!)
Comments: Just ask all the miners at the last International Mining Conference (I was there were you?)

Aqui Me Quedo!(12/7/97)
Guanajuato, Guanajuato
Rating: 1 bottle
Brew: Bombillias
Comments: No Hat Banyo (Ya just piss on the floor). Abierto a las 6:00 AM. The best thing is oxtail caldo. Nice family establishment. Frequented by local miners who don't care what time it is just like Battle Mountain, NV. Been there done that. If you can't run with the big dogs: Stay on the porch! Adios (unknown)

Romero's (06/21/97)
East Ensenada, Baja California Norte
Rating: (none)
Brew: Margaritas
Comments: - Hidden away in the SE corner of the cruise ship pier. Only open when the cruise ships are in. Only five stools, but a perfect place to watch the tourists leave the ship. For real enjoyment stay for several hours (drinking margaritas )and watch the tourist come BACK to the ship. No amount of $$$ can buy the entertainment provided by the tourists themselves. I've known Romero for 30 years, his drinks are outstanding - not too much and not too little. Margaritas made from scratch. Bartender excellent. (Baja Brian)

NoName Bar in Minera de Opalos (06/03/97)
About 60 mi from Queretaro, Queretaro
Rating: 1 bottles
Brew: Pulque (fresh and raw)
Comments: Gawd awful stuff that pulque. However the opals get prettier and the girls get "less so" as the night goes on. (Walt Bowser)

Zapote (03/25/97)
Moris, Chihuahua
Rating: 1 bottle
Brew: Sotol
Comments: Miss it if you can, alchohol is illegal and the homebrew is toxic, expensive and will get you in trouble with the local women.

Moechandon (01/30/97)
Iguala, Guerrero, Mexico
Rating: 1 bottles
Brew: Anything
Comments: Go for the entertainment! Go on Friday and sit with your back to the wall. (SH)

Rosas Hotel (12/08/96)
Charcas, SLP about 250 km from SLP at Charcas
Rating: 3 bottles
Brew: Best beer in town
Comments: The Rosas is also the best hotel in town and the owner sells mineral specimens too! Can't beat that. (Pedro)

Chilo's Cantina (12/06/96)
Santa Eulalia, Chihuahua around 25 km E of Chihuahua City
Rating: 4 bottles
Brew: Carta Blanca or Vampiros
Comments: Pick up some minerals while you are there. (anonymous)